YouTube simulated the effect of HDR, using these images

YouTube has introduced support for technology that promises to make its videos appear more vibrant and realistic.

High dynamic range (HDR) clips feature a wider range of colours and a greater number of brightness levels between black and white. This boosts contrast and can make images seem more detailed.

However, users will require compatible screens to see the improvements.

And HDR-encoded videos may also look odd when played back in normal mode.

While YouTube is offering one of the first ways for the public to share videos in the new format, professional streaming services including Netflix and Amazon Video have offered HDR films and television programmes for several months.

"YouTube's move is a big vote of confidence in HDR," said David Mercer, from the technology consultancy Strategy Analytics.

"It really is all about whiter whites and blacker blacks - it sounds corny, but when you've seen a really good demo, it can be quite spectacular.

"But we will all need HDR screens to enjoy it."

Many of the latest 4K televisions support the innovation, which can help water appear to glisten, stars to sparkle and generally adds "pop" to footage.

But it is still relatively rare to find HDR-capable computer monitors or laptop displays.

But consumer-orientated software, including YouTube's own web-based Editor, have yet to do so. 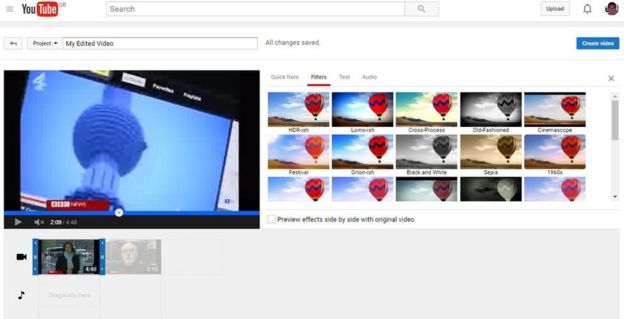 YouTube's built-in video editing tool does not yet support HDR

To ensure those without compatible displays do not miss out, YouTube will, by default, play a standard dynamic range (SDR) version of a clip if necessary.

To make this possible, the Google-owned service will automatically generate a "down-converted" version of HDR material posted to its platform in a similar manner to how it already creates lower-resolution copies of uploads.

However, professional video editors are normally advised against relying on such automated technology because it can cause colour shifts, which result in unnatural looking footage.

HDR uses the Rec 2020 colour space, which is wider than the Rec 709 range of colours supported in most TV broadcasts 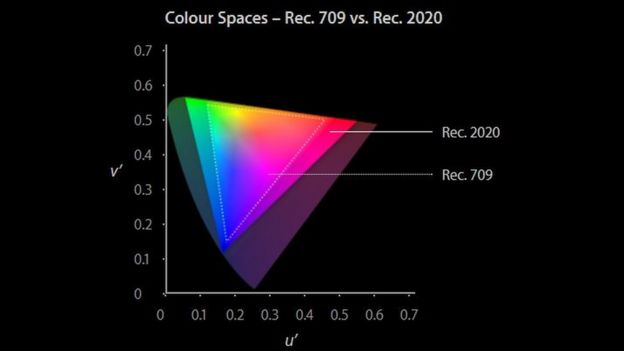 "On challenging clips, it might not deliver the perfect result," it says.

"We're working on improving automated SDR down-conversion so that it works great for all material."

Videos that have been colour-graded to enhance their look will be among those most at risk of being tarnished, undermining the extra effort taken to create them.

For now, the only way round this is for creators to separately upload both an HDR copy of a video and a manually tweaked SDR version, which will appear on different YouTube pages.